Before going in details, let’s start with an overview of the history of ancient Albania… 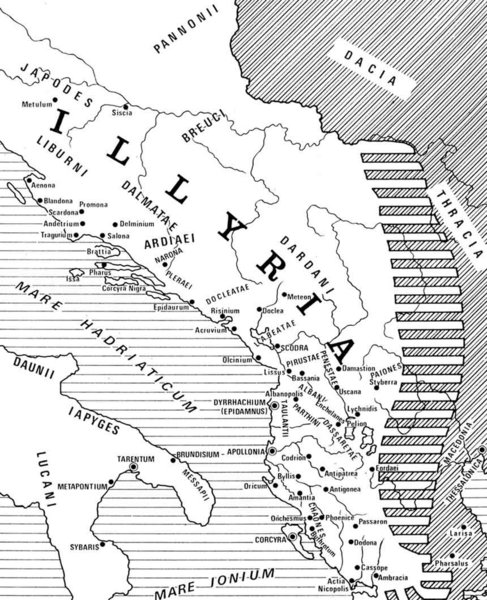 We specify that, when we talk about Illyrians, we are talking about the ancestors of the Albanians.

Comparing ancient Albania, namely the great and most developed Illyria, with the small, mutilated, plundered and mortified Albania of today seems odd. Even the last fifty years of cruel communism has made use of all sorts of violence to oppress any human feelings and to cancel the previous civilizations. The democracy is recent in Albania. Starting from the capital, Tirana, its economy is blooming; you can see discotheques, bars, expensive constructions etc.

Now, we will consider a period very distant in the past. Ancient Illyria, was the country of Illyrians, which means “free people” in Albanian. It extended in the western Balkans and was made up from many well developed tribes living around the city-states under one single king. Out of many Illyrian kings, we will mention only the last three, who after reaching the summit of the civilization of those times, with the most perfect schools attended by the greatest notables, as it happens for everything in this world, also for Illyria the decline began.

King Glaucous (312 a.c) had achieved the climax of the evolution of the country in all fields and thanks to his wise guide Illyria had enjoyed 80 years of peace and prosperity. His heir, King Agron, showed military ambitions and, according to the historian Strabo, made Illyria a very powerful country. Perhaps he was concerned about the increasing power of Rome, which was in continuous expansion, and that it represented a danger for the Illyria. After his death, queen Teuta, a very determined and dynamic leader, went to throne. Queen Teuta was not appreciated by the Romans that called her “the hysterical queen”. Indeed, Teuta must have been a very energetic ruler, judging from the treaties and alliances she carried out, in particular with Syracuse. It must be noted that women in Illyria, as in Etruria, had equal rights with men and did not need a tutor (or kryos) as in Greece and Rome. During her reign, piracy increased in the Adriatic and Rome sent in 229 B.C an embassy to the queen in order to discuss the matter. After a member of the embassy was killed, the Roman senate sent a great expedition that forced queen Teuta to accept conditions that she considered so humiliating as to take her own life. Last king of Illyria was Gentius, a bright politician, a diplomat as well as a naturalist (he discovered the therapeutic qualities of the herb still called “gentian” after him). He made Shkodra the capital of the whole country and tried to centralize the power. His decision to reserve Shkodra the privilege to mint money was disliked by some of the city-states, and that made Illyria more vulnerable.
Gentius’ alliance with Macedonia was the pretext for Rome to recommence war against Illyria, which was conquered along with the rest of the Balkans in 168 B.C. To assure the domination over the whole country, Rome divided Illyria in three different provinces and although traditions and customs were respected, the wane of country was relentless.

The culture of the defeated party is bound to be overwhelmed by those of the conquerors. Only the earth is able to preserve into its material womb the witness of a civilization destroyed by the human foolishness that, whilst trying to overcome all and everything, with childish irresponsibility covered up what would have been useful to the common evolution of the whole mankind.

However, even after the occupation, the schools of Illyria illuminated the minds of many distinguished Roman persons. Among the most famous we can cite Julius Cesar, who accomplished his education in the schools of Durres, as he himself relates in his “De Bello Civili”. The magnificence of that town made Cicero define Durres “mirabilis urbs”, an acknowledgement normally reserved only to Rome. Another famous roman who studied in the Illyrian city-state of Apollonia (Southern-Albania) was Octavian August, who loved and cherished that place during all his life.

In addition to giving Rome valiant legionnaires and pretorians, Illyria gave to Rome and Byzantium many emperors, amongst which:

Many other tragic events hit that territory, from the dominion of Byzantium, to that of the Ottoman occupation which lasted almost five centuries. Albania had a glimpse of glory between 1443 and 1479 with the national hero Gjergj Kastrioti Skenderbej, Prince of Kruja, who gathered together all the other Albanian chieftains and together managed succesfully to keep Albania free for over a quarter of a century, beating and resisting the strongest army of the time, the Ottoman invasion.

Gjergj Kastrioti (in the image) was born in Kruje from Gjon Kastrioti, getlteman of the Central-Albania, who was forced by the Turks to render homage to the Ottoman Empire. In order to assure fidelity of the local leaders, the Turkish Sultan took one or more of their sons as hostage and carried them in his court. Gjergj Kastrioti participated in the military school in the Ottoman Empire and later became known as Iskander Bey that in Turk means Lord Alexander.
Skanderbeg was distinguished for his great intelligence: in addition to his native Albanian, he spoke Turkish, Arab, Greek, Italian, Bulgarian and Serbo-Croatian. Scanderbeg was a great expert in the military strategy up to the point to earn the confidence of the sultan.
He fought for the Ottomans, up until he and a group of faithful soldiers took control over the castle of Kruje in Albania.

Sultan Murad II was furious about the betrayal of the man he had cared for. He sent against the Albanians, a powerful army of 100.000 men, led by Ali Pasha. The forces of Skanderbeg were remarkably inferior numerically, but thanks to his military tactics the Turks suffered another defeat.

The outcome of the conflict made the sultan even more furious, who ordered Firuz Pasha to destroy Skanderbeg and the Albanians. So, the Ottoman commander left to the head of 15.000 knights. Skenderbeg was victorious again. Skanderbeg facts were known all over the West; Skanderbeg earned the titles of “fearless defender of the western civilization” and “athlete of Christ”.

Murad II did not give up. He assigned to Mustafà Pasha two armies of 25.000 men in total, half of which were knights. The outcome of the fight with the Albanians was disastrous, only few Turks managed to survive, including Mustafà Pasha.

In the spring of 1449, Murad II himself headed an army of 100.000 soldiers in a campaign against Albania. Between fights and besieges the Turks lost half of the army and Scanderbeg himself put to death commander Firuz Pasha.

Maomet II, successor of Murad, decided to send two armies against Albania; one led by Hamza-bey and the other by Dalip Pasha. In July 1452 the two armies were destroyed and while Hamza-bey was captured, Dalip Pasha instead died in battle.

Other Turkish incursions saw the defeat, in Skopljë on the 22nd April 1453, in Oranik in 1456 and on the 7th September 1457 in the valley of Mati river. At last, during the year 1459, three other Turkish armies were defeated in a series of violent attacks, this time the attacks were commenced by Skanderbeg.

The reputation of Skanderbeg was overwhelming; the Turkish sultan did not have any choice but to ask for peace, Kastrioti (Skanderbeg) did not want to know about it and continued his battle.

In 1458, Kastrioti went to Italy in order to help Ferdinand I, king of Naples, son of his friend and defender Alfonso of Aragon, in the fight against Giovanni d’ Angiò and of his army.

In the meantime, another two Turkish armies led by Hussein-bey and Sinan-bey, moved against the Albanians in February of 1462. Scanderbeg was forced to re-enter quickly in his native land, in order to guide his army. There was a furious battle near Skopljë that saw the Turks destroyed and the dream of Maomet II, to bring the Muslim power to Rome broken up. The final decision was a peace treaty signed on the 27th of April 1463 between Maomet II and Kastrioti.

Notes:
The road that goes to Kruje, was called by the Turks, “jezitjoll”, that is the way of the devil.

A participant to the shipment against Albania said “their weakest warrior is comparable to the strongest of our Turkish warriors”.

The following year, after the danger of the crusade went away, the Sultan sensed an opportunity to put an end to Kastrioti, The sultan put together a strong army and entrusted it to an Albanian traitor, Ballaban Pasha, who was raised in the same way as Scanderbeg,. This enterprise failed too and the Turkish army was forced to escape by the Albanian forces.

Once again, in the spring of 1466, the re-united forces of the sultan moved against the Albanians and besieged Krujë; a series of furious fights, during which Ballaban Pasha was killed. This took Skanderbeg to another extraordinary victory. Maometto II , the most obstinate in his fight against the Kastrioti, reorganized his army and, in the summer of 1467 started new besieges to Krujë, but, after several attempts, he had to give up and leave.

Whilst Skanderbeg was alive, the Turks never managed to conquer his empire.

Skanderbeg died of malaria in Lezhë on 17th January 1468; Krujë, the heroic town fell to the Turkish hands ten years later.
However the Turks did not succeed in erasing the reputation of Kruje. The wave of Turkish military destroyed not only cities, but also castles, cathedrals, palaces and public buildings inherited from the previous centuries. In addition, important paintings and sculptures were destroyed or lost; documents and manuscripts of extraordinary value were burned; despite everything, Krujë, even though mutilated, represents a glorious monument of the heroic resistance and of the creative spirit of the Albanians.

In 1480, the Ottoman army, once re-conquered Albania, crossed the Adriatic and landed at Otranto, from where shortly after was definitely driven back beyond the Adriatic. Gjon, Scanderbeg’s son, and a group of Albanian warriors contributed to the victory and Gjon distinguished himself in it. Italy and Europe were saved, but for Albania, depressed and decayed, there was no other choice but to export brains again: Albania gave to the Ottoman Empire no less than 36 Grand Viziers (prime ministers)!

Albania became independent only in 1912 under the guide of the democratic ISMAIL KEMAL and the country began to heal its dreadful wounds; although another misfortune hit Albania: the fascist occupation, as reaction then there was comunism, which lasted nearly half century.

Today, finally Albania has chosen the democracy, which is rebuilding the country and making it worthy of the right place in Europe. This place was deserved from the age of the large and evolved Illyria that was able to spread everywhere its enlightening culture, which originated from the Pelasgic culture.

I hope I have been able to give you a gleam of light on Illyria, and its extremely little heir Albania, especially for those who have never had the chance to know perhaps even the existence of this small country, for so long hidden to the eyes of civilized world and to the main scientific developments.

Precedente The Enigma of Pelasgians and Etruscans, Albanians

This site uses Akismet to reduce spam. Learn how your comment data is processed.